Commercial Aviation Took Off in Pittsburgh by Adam Lynch 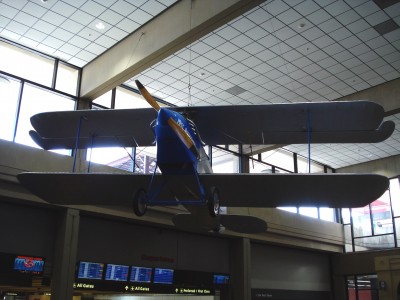 Not all the thousands of people who regularly pass beneath her glance up, but occasionally, one will stop for a better look. She hangs from the ceiling of the Landside Terminal at Pittsburgh International Airport with her name, Miss Pittsburgh, written on her nose. Further back, on the fuselage of this very old airplane, are the words U.S. MAIL.

Once, she represented the very beginnings of successful, commercial aviation in this part of the country. It is no exaggeration to claim that this 85-year-old, single-engine, canvas-covered Waco 9, along with her identical, open cockpit hangar mates Miss Youngstown and Miss McKeesport, were the planes that helped launch an industry. Two of today’s best-known airlines—US Airways and United Airlines—trace their growing years to Pittsburgh.

It took a rare combination of personalities and events starting in the early 1920s to create the air industry we know now. Two local men with an intense interest in aviation came together at the right time. Clifford Ball, a McKeesport automobile dealer, had been fascinated by aerial demonstrations at a field on a hill above Dravosburg, across the Monongahela River from McKeesport. The field was 40 acres owned by D. Barr Peat, who invited pilots to come and entertain folks who hardly knew what airplanes looked like.

In 1924, Ball mortgaged everything, borrowed the rest, and bought the property from Peat for $35,000. He erected a building that was a combination machine shop and hot dog stand. Peat, now a partner in the operation, cut down trees, ran the tractor, and molded the property into what they first called Pittsburgh/McKeesport Airport and later simply Bettis Field, in honor of World War I army pilot Lt. Cyrus Bettis. (The site is now the Bettis Westinghouse Atomic Facility.)

With no clear plan, activities at the airport were limited. They had two old airplanes, and offered rides for $5, flying lessons, parachute jumps, fireworks launched from airplanes, and hot dogs. They charged visitors 25 cents to watch the planes cavort in the air. Ball’s secretary, Helen Stinner, served as gatekeeper and ticket taker and was surprised that a good day could produce $500. However, both men wanted something more than running a weekend flying circus. A political connection of Ball’s would pay off in dramatic fashion.
The advent of airmail

U.S. Congressman Melville “Clyde” Kelly had published newspapers in McKeesport and Braddock. Popular and ambitious, he served two terms in the Pennsylvania Assembly, and in 1917 won election to the U.S. House of Representatives, where he chaired the Post Office committee. With help from the influential Aero Club of Pittsburgh and the Pennsylvania Chamber of Commerce, Ball convinced his friend Kelly to sponsor federal legislation changing the delivery of airmail.

Earlier airmail attempts had proved inefficient and dangerous. Of the initial 40 Army Air Corps pilots involved, three died in crashes in 1919 and nine more in 1922. Limited pilot experience, dangerous weather, and flying at night over unfamiliar territory were to blame, as was the “mail must go through” mentality. When the “Kelly Airmail Act” became law in 1925, not one Pennsylvania city had airmail delivery.

The new law authorized the federal government for the first time to “designate airmail routes and to contract with private parties for their operation.” Historians call it “the cornerstone of the modern air carrier industry.” Ball received airmail route No. 11—the 127-mile flight between Pittsburgh and Cleveland. The first official flight took off from Bettis Field at noon, April 21, 1927, a few months before Charles Lindbergh crossed the Atlantic.

Purchasing airplanes and meeting growing payroll and operational costs were expensive, but one flight in a Waco 9 loaded with mail bags could return as much as $1,500. Ball’s pilots included men with such marvelous names as Curly Lovejoy, Merle Moltrop and Dewey Noyes. Ball called his airline Path of the Eagle and soon began carrying passengers to a growing number of cities. His first passenger was vaudeville entertainer Will Rogers, who paid $20 for a Miss Pittsburgh flight to Cleveland, sitting on a pile of mail bags.

It was about this time that Helen Stinner became a one-person public relations dynamo. She visited post offices in McKeesport, Youngstown and Pittsburgh, set up a portable booth, chatted with postal patrons, and explained how they could send airmail letters for 10 cents an ounce. By the end of 1927, Ball’s little airline had carried almost 10 tons, and in the next two years, it soared past 91 tons. Ball purchased some Fairchild FC-2, four-person, closed-cabin aircraft and in August 1929 began the first scheduled passenger service to Washington from the west. Pittsburgh-area businessmen, noting Ball’s success, began forming new airline companies to compete in the growing industry.
A new industry

Enter prominent Pittsburgh attorney George R. Hann. In 1928, he arranged a meeting with A.L. Humphrey, president of Westinghouse Airbrake Corp., to discuss commercial aviation. Hann brought in University of Pittsburgh professor Bedell Monro and his brother-in-law Fred Crawford. Together, they attracted more than $1 million in investments and started the Pittsburgh Aviation Industries Corp. (PAIC). Envisioning a national airline, they soon combined with Transcontinental & Western Air (T&WA, which became TWA). PAIC got 5 percent of the stock in the new creation, which they called Pennsylvania Airlines (PAL). After carrying 7,000 passengers in 1931, they purchased 12 Tri-Motor Ford Airliners, and by 1933 had 14,000 passengers.

The economic engine helping to drive the business was the profitable airmail contract. In 1930, Ball, citing what he called “economic and political pressure,” reluctantly sold his airline interest to PAIC for $130,000. His valuable airmail contract was part of the deal. He was given a position as vice president of “operations,” but soon quit. He and Helen Stinner, now married, went to Florida for six lazy months to regroup.

Meanwhile, the airline industry was about to weather a series of disturbing events. Amid charges (some valid) of industry-wide fraud and corruption, President Roosevelt cancelled all airmail contracts in February 1934. The Air Corps was again called on to deliver airmail, but with the same handicaps and tragic results of 1919 and 1920. In the first week, five pilots died. Of 26 ensuing crashes, 12 were fatal. The government retrenched, announcing that all airmail contracts would be rebid. Previous contractors were barred from the process, so PAL stockholders simply reorganized the company, calling it Pennsylvania Airlines and Transport Co. Heated competition and confusing name changes became industry norms.

Pittsburgher Jim Condon and brothers John H. and Richard W. Coulter created Central Airlines. With the reorganized PAL and Central flying similar routes out of the new Allegheny County Airport, the infighting became bitter. Fares were cut and cut again. Each company accused the other of stealing passengers when departure times coincided. Neither made profits, so the obvious solution was a merger, and in 1936, Pennsylvania Central Airlines (PCA) came to be. By the end of 1938, the airline had carried 85,000 passengers.

PCA replaced its fleet of 10 passenger Boeing 247Ds with state-of-the art DC-3s, the iconic airplane that made commercial flying not only more profitable but safer and faster. It moved its headquarters to Washington National Airport, but economic pressures continued. New management changed the name to Capital Airlines in 1946 and enjoyed several years of success, becoming the fifth-largest domestic carrier. The wild series of mergers continued, culminating in the 1961 merger of Capital into United Airlines, creating the world’s largest commercial airline with a route network spanning the country. A relative stability followed, which ended only with the terrorist attack of 2001, from which the industry has never fully recovered.
Ball’s legacy

Cliff Ball must have watched western Pennsylvania’s dizzying aviation history with a degree of bitter amusement. Although without an airline of his own, he came home to play a huge leadership role in the local industry. During World War II, he was director of Graham Aviation in Butler, which trained Air Corps pilots. He became the first superintendent of the Greater Pittsburgh Airport when it opened in 1952, later serving as director of the Allegheny County Department of Aviation until 1958. He long presided over the prestigious Aero Club of Pittsburgh, whose membership included not just pilots but the captains of many local industries. Despite his influence, he remained humble. Ball, who died in 1972, never acquired a pilot’s license, but his wife Helen did. Ever an active aviation enthusiast, she counted among her friends such luminaries as Lindbergh and Amelia Earhart. She often flew to Washington to visit with Ernie Pyle, who was an aviation writer there before he became famous as a roving World War II newspaper columnist.
The grande dame returns

In 1960, Kingston, N.Y. businessman Marty Horan saw an old airplane being used for advertising at Florida’s Tamiami Airport. It was Miss Pittsburgh. Horan bought the aircraft and flew her for fun for several years. Later, he had Miss Pittsburgh dismantled and shipped to the Old Rhinebeck Aerodrome in Rhinebeck, N.Y. for use in vintage airplane air shows. Apparently, however, she was never reassembled.

In 1992, Frank Gustafson of Swissvale spotted the letters “BURGH” on a piece of an old airplane amid odds and ends in a corner of a hangar at Rhinebeck. He then found the wingless fuselage, still on wheels. Gustafson told former airline pilot Jim Taylor of Bethel Park what he had seen, and word spread. Soon, local aviation enthusiasts combined to bring what was left of Miss Pittsburgh back home, and in 2000, Horan agreed to sell the old plane to the Historical Society of Western Pennsylvania for $62,000.

Of the airplanes that carried the early mail in this region, Miss McKeesport resides in a Columbus, Ohio museum. Miss Youngstown has simply disappeared. But on April 28, 1995, a bright nylon covering was pulled away at the Pittsburgh International Airport, and there, hanging from the ceiling, was Miss Pittsburgh.

She’s in the air again in the city where she helped launch commercial aviation. Outside, sleek, loud, wide-bodied jetliners climb steeply into the sky while little, twin-winged Miss Pittsburgh hangs silently, frozen in time.

Adam Lynch Adam is a retired Pittsburgh WTAE news anchor/reporter who, after some 40 years of broadcasting, launched a freelance writing career. Mostly, he writes about historic or military aviation events. When not writing, he might be found fishing, photographing or bird watching. Adam lives with his wife, Ellie, in Monroeville, where the couple recently celebrated their 51st wedding anniversary.