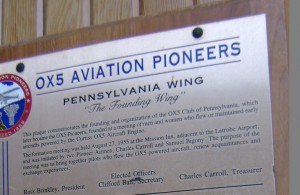 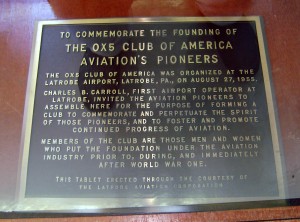 This plaque commemorates the founding and organization of the OX5 Club of Pennsylvania, which later became the OX5 Aviation Pioneers.  The organization was  founded at a meeting  of men and women who flew or maintained early aircraft powered by the Curtiss OX5 Aircraft Engine.

The formation meeting was held August 27, 1955 at the Mission Inn, adjacent to the Latrobe Airport, and was initiated by two Pioneer Airmen, Charles Carroll and Samuel Bigony.   The purpose of the meeting was to bring together pilots who flew the OX5 powered aircraft, renew acquaintances and exchange experiences.

NOTE:  The Pennsylvania Wing was “The Founding Wing” and is now known as