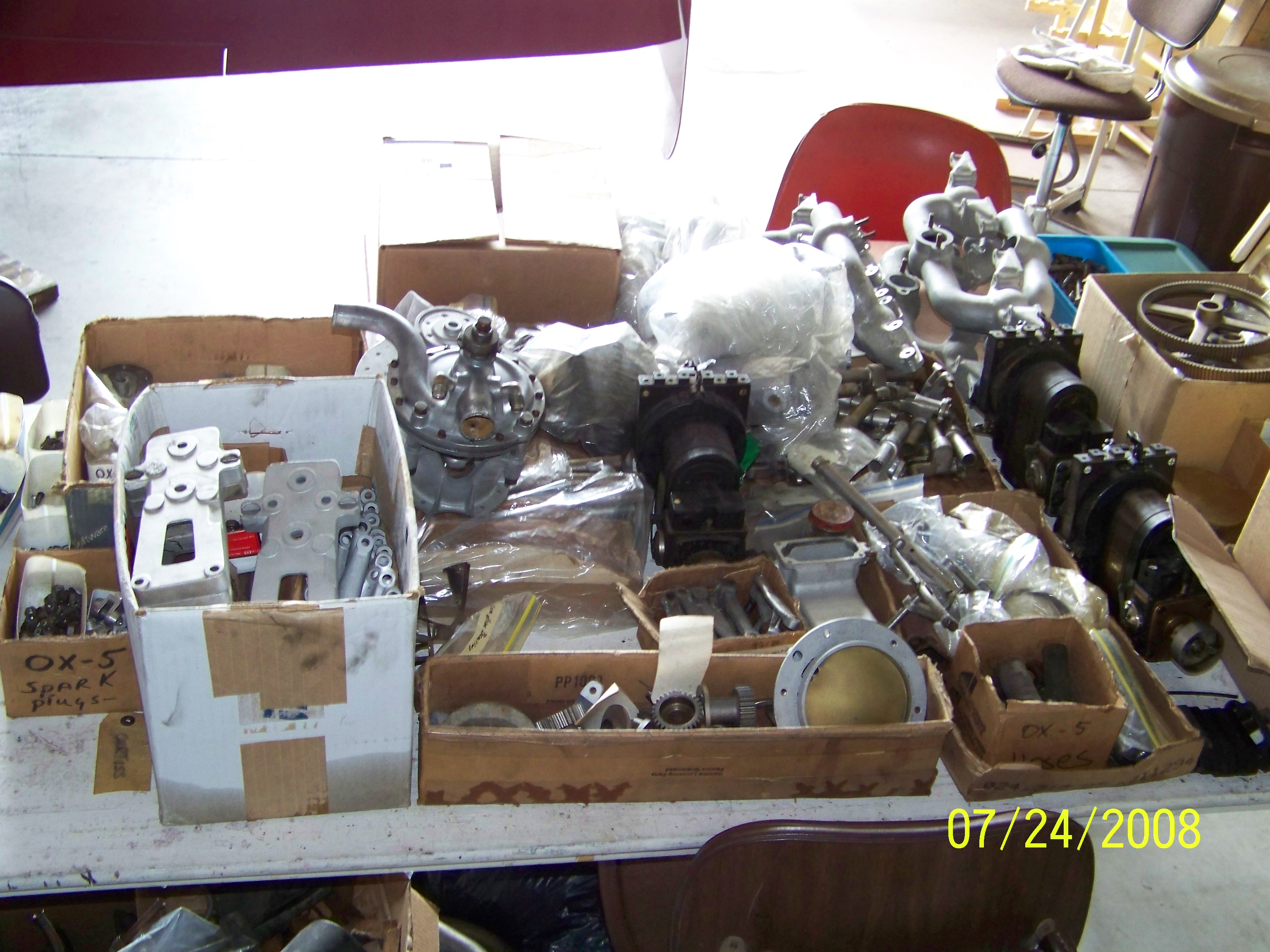 Re: The 1927 Swallow my dad and brother own as well as some of our family’s aviation history.

I am Chuck Laird’s son who asked me to forward along some of the information I have.

This is not everything I have, so if you want more, let me know. I will attach the ppt we have used for presentations in the past (I formatted it to pdf so that I had a better chance of attaching it to the email). It was designed to be shown with narration.

I am also attaching a story that I wrote to give the family background and connection to the plane. Hope you enjoy them.


Cursor over above box.   Click on lower left down arrow to view 72 Laird photos.

The following is the story of a very special plane and the people historically bound to it. While every vintage plane has a unique past (and this plane is no exception), in the case of this plane, the story begins with two brothers and a shared passion: The passion of flight.

The plane is a 1927 Swallow OX-5 and the owners of this plane are inexorably and historically tied to it.  As such, we want to take this opportunity to explain why this plane is so special.  As is often the case with objects of great beauty and craftsmanship, the value of an object has as much to do with its creator, as it does the object itself.  To really understand the joy that this plane brings to those who are fortunate enough to be in possession of it today, it is necessary to pull back the clouds of time and look back into the clear blue skies of aviation past when the nation was young and the pioneers of aviation were first making a name for themselves.

One of those pioneers was a man named Laird.  Within historical aviation circles, the name of E. M. “Matty” Laird is well known.  In the Golden Age of aviation, the name of Laird has a place of honor alongside the pantheon of aviation pioneers like the Wright Brothers, Glen Curtis, Walter Beech, Lloyd Stearman and Clyde Cessna.  For those few who know their aviation history (and that number is growing smaller by the day), the Laird name and the many aircraft that bore it represented quality, excellence and pioneering achievement, not to mention speed.  And while the name of Matty Laird has continued to be remembered, there was another Laird, his brother, Charles L. Laird.

Charles Laird may not have gone on to the same fame and status as his better-known brother; however his passion for airplanes, figuring out how to build them and how to make them better was no less great.  He lived planes.  He made a career out of them.  From his teenage years to the time he died, he worked on and with aircraft of all kinds.  So before we can get into the story of this particular plane, we first need to briefly give the story of this man, because without him, neither this plane nor I would be here today.  As the reader might have guessed by the similarity in last names, there is a relationship between Charles and myself.  This story, really, is a story about my Great-Grandfather, the plane that he was instrumental in creating, and how this plane, after all these years, came back into the possession of his descendants.

Charles Lawrence Laird’s family was originally from Scotland but they had settled in Birkenhead, England where they had established themselves as prominent shipbuilders in the early 19th Century and eventually became some of Birkenhead’s leading citizens, including John T. Laird becoming the region’s first MP and John Jr. becoming the city’s first mayor.  After heading back to Glasgow, in 1871, John Jr. immigrated to America, arriving in New York with his wife, Agnes, and young son, William (Charles’ father).

Charles was born in Chicago in 1899, the younger brother of Matty, who was born in 1896.  Matty and Charles both showed an early interest in aviation, along with their older brother William (b. 1892).  Matty taught himself how to fly in the vacant fields outside of Chicago (later called Cicero Field) after they built a 12-hp monoplane by themselves in the attic of their home.  As Matty was honing his flying skills with the monoplane, Charles and Buck Weaver (Who is the namesake for WACO- Weaver Airplane Co.) began construction on a new plane that would become known as the “Baby-Biplane.”  It was this plane that led to the later construction of the “Boneshaker”.  It was the “Boneshaker” that first flew a loop with a passenger (Katy Stinson) and went on to become very famous in it’s day as well as helping to make a name for Matty Laird.  In the years between 1913 and 1918, Charles continued to learn his craft by working for the likes of Katy and Marjorie Stinson (Where he did maintenance on the Wright Model “B” flyer), Glen Curtis, Standard Aircraft Company and the U.S. Navy.

Charles eventually rejoined his brother with the newly formed “E.M. Laird Airplane Company” in 1918 and was factory supervisor through 1922.  During that time period, Matty had become partners with a man named Jake Mollendick, who later would become known as the “Father of Wichita Aviation”, and had moved the company to Wichita, Kansas.  In the years between 1920 and 1927, commercial aviation was born and aviation in the United States would be forever changed.  Few would have guessed at the time that Wichita would become the center of this pioneering enterprise.

The first plane the Laird’s produced in Wichita became known as the “Swallow” and the rest is aviation history. The Swallow went on to become the first “commercial aircraft” in the U.S. and over the next few years, as Charles was supervising the construction of all the planes and Matty was busy flying them on sales tours, some of America’s most famous aviation pioneers came to learn and/or hone their craft at the E.M. Laird Airplane Company.

Buck Weaver (already mentioned) was hired on as sales manager after the first WACO airplane ever built failed to live up to expectations.  Matty also hired on a couple of brothers: Lloyd and Waverly Stearman.  Lloyd was a draftsman and Waverly an all-around shop hand.  Jake (Mollendick) then hired Walter Beech who flew Swallows and was a good salesman.  During these years each of these men would gain experience, knowledge and then, eventually, their own ideas about how to build planes and what kind of planes they wanted to build.  It would not be a stretch to say that they learned more than a few things from Charles, who would have been their supervisor.

In 1923, Matty and Jake had a major disagreement and Matty went back to Chicago. It was at this time that the company in Wichita became known as Swallow Manufacturing Co., and Lloyd Stearman updated the design as the “Super Swallow”.  Then in 1924, Stearman and Beech left Swallow to form Travel-Air Manufacturing Co. along with Clyde Cessna.  Within a few years Beech, Stearman and Cessna would all go their separate ways and each one would contribute something specific and important to the future of aviation.

During his days at Swallow, Charles (along with Lloyd Stearman) had designed and built a twin-engine (OX-5) 7- passenger airliner called the “Transport.”  After it was refitted with a more powerful Liberty engine, Walter Beech made a forced landing in the plane (renamed the “Limousine”) and it had to be scrapped.  This led to a falling out between brothers and Charles left the company in1922.  In 1925 however, Jake lured Charles back to Swallow.

In his second stint with Swallow, Charles designed the “New” Swallow and some were fitted with a J-6 (225 hp. Whirlwind).  It performed so well that Varney Airlines purchased several of them.  Varney flew passengers and mail from Elko, Nevada to Pasco, Washington.  Eventually, Varney Airlines became known as United Airlines.

After Jake refused payment for design services, Charles left Swallow in late 1927.  Once he left Swallow, he formed his own Laird Manufacturing Corporation.  Between 1927 and 1929, Charles designed and built his own “Laird Specials” as well as a cabin passenger plane called the “Whippoorwill”. After the crash of the stock market in 1929, Charles was wiped out, but not before paying back all of his stockholders.

Charles returned to Chicago where he designed and built custom planes from 1930 to 1932.  From 1933-1945 he worked for major aircraft corporations like Northrop, Consolidated and North American where he was eventually given the task of final inspection on many types of aircraft because of his overall knowledge and expertise.  He served as Chief of Final Inspection for North American throughout the duration of WWII.  The 80-100 hour workweeks during the War had taken their toll physically and he didn’t work much for a couple of years.  Then, in 1950, when the Korean War broke out, he went to work for the Air Force at George Air Force Base (Adelanto, California) as Chief Inspector until his death in 1967.

It is likely that he worked on the very Swallow that the family now enjoys.  Even if he didn’t work on it physically, it exists today because of his contributions and the contributions of so many other men who would go on to shape civil aviation, as we know it.  We do know that this plane was completed in December of 1927; just 2 months after Charles left Swallow.  So, it is with a profound sense of history and gratitude to those who worked to get this plane back in the air, that we are able to enjoy flying this piece of aviation Americana.

We would like to thank Will Laird for permission to post his great article and presentation about his Father Chuck Laird and the family aviation history.