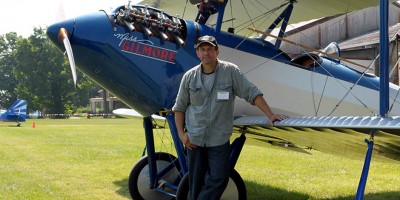 MOUNT VERNON — You may have passed Frank Pavliga on the way to work Thursday morning, but if your eyes were on the road you’d never know it.  Pavliga, a second-generation aviation enthusiast from Atwater in Portage County, was probably going about 50 when you zipped by … 600 feet beneath his WACO 9 biplane.

Pavliga was en route to Wyncoop Airport from historic Barber Airport in Alliance, bucking a headwind and having a ball behind the stick of an aircraft that was born with Calvin Coolidge in the White House and powered by an engine that dates all the way back to Woodrow Wilson.

It was only Pavliga’s fourth time up in the open-cockpit relic, which he has lovingly restored over a span of 14 years, and he is now the only person on earth with an airworthy 1925 WACO 9 standard model. The rare plane will be at Wyncoop Airport through Saturday and is one of about 40 vintage flyers taking part in the 53rd Annual National WACO Reunion.

Pavliga has named his blue and silver beauty Miss Gilmore in recognition of the Gilmore Oil Co., which was prominent in the oil and gas industry from 1900 to 1945. The plane’s engine, a 1916 Curtiss OX-5 V-eight, has ties to the U.S. Postal Service. Pittsburgh International Airport currently displays Miss Pittsburgh, the WACO 9 that made the first airmail flight from Pittsburgh to Cleveland in the spring of 1927. But the actual Curtiss powerplant from Miss Pittsburgh now resides under the cowling of Pavliga’s Miss Gilmore.

“It is a blast to fly,” Pavliga said of his WACO 9. “It’s nothing like a modern plane. It doesn’t have trim controls and it’s never really perfectly balanced. You can never take your hands off the controls, but you get used to it.”

From the Mount Vernon News